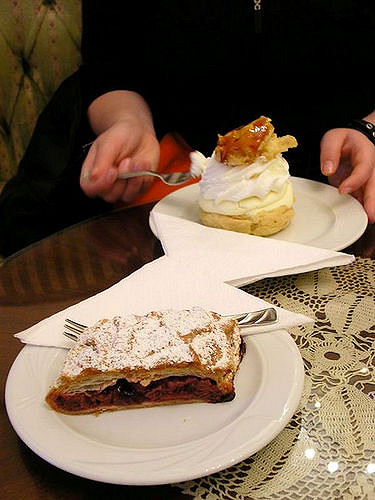 Retes and Kremes- Strudel and Custard Slice photo by meaduva

Hungarian Rétes is a type of layered pastry with a filling that is usually sweet. It became popular in the 18th century through the Habsburg Empire. Hungarian Rétes is similar to the Vienna Strudel, except it is thinner and much lighter and flavourful without being overly sugary.

There is a definite family resemblance between Strudel Dough and the Greek Phyllo. The Hungarians could first adopt the thin dough from the Turkish pastry Baklava in the 1500s.

Hungarian style strudel consists of about 6 layers of phyllo dough and can be filled with sweet or savoury fillings such as quark, apple, cabbage, poppy seeds, butternut squash etc. Retes is a traditional cake made for weddings and other family occasions. As Retes is very popular all over the country, there are Retes festivals to celebrate it and try new flavours for example Oreo flavoured.

In 2016 the town Mesztegnyő has made the longest Retes ever, it vas 104 meters long and it has been served on the Retes Festival in Mesztegnyő.

We recommend you try so many variations as you can while getting around Budapest! Fancy to try Hungarian foods? Taste them on one of the Market Tours.