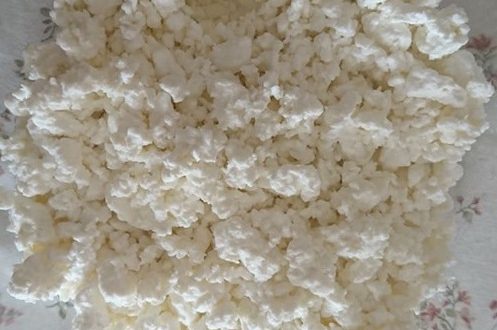 Quark is very popular in Hungary and it’s eaten in countless ways, sweet or savory, therefore it can be found at several stands of the Budapest Market Halls.

One of the greatest Quark Dumplings (Turogomboc) of Budapest can be tasted on a Guided Market Hall Tour, so we would definitely recommend booking.

Some of the most traditional Hungarian foods made with quark are the following:

is a popular and unique Hungarian sweet quark bar coated with chocolate.
Since 1968 Túró Rudi is loved by children and adults, nowadays made with fruits or toffee or other fillings too. Túró means Quark and Rudi comes from “rúd” which translates to bar, and is also a nickname for the name “Rudolf”.
The original Túró Rudi comes in a red polka dot wrapping, so it is easy to spot it in the supermarkets.

There is nothing better on a hot sunny day than a Túró Rudi, grab one and try yourself!

Everyone loves pancake since the Ancient Roman Empire introduced it to the world. Hungarian pancakes are very thin, filled with sweet or savoury fillings and rolled up like a roulade. One of the most popular taste is “Túrós” / Filled with Quark cream. The filling contains egg yolk, vanilla sugar and raisins (and sometimes lemon zest).

Strudels are popular in Middle- Europe and of course in Hungary too. We can find strudels with sweet or savoury fillings. The most known sweet strudel is filled with sweet quark.

Dumplings are delicious Hungarian sweets, they are available with various fillings, such as plums, apricots, cocoa cream or quark. The dumpling itself is a mixture of eggs, semolina and quark. When the semolina took the moisture the dumplings are cooked and covered with sweet, roasted breadcrumbs and garnished with sour cream and icing sugar. It is a perfect second dish after a filling soup such as goulash.

Derelye is a potato-based sweet dumpling, can be filled with jam or sweet quark. The shape is close to gyoza, and it is coated with sweet breadcrumbs. The jam version is called ‘Barátfüle’, which is translated to Friend’s ear.

is a traditional Hungarian pasta with quark and smoked bacon sprinkles. The fried bacon’s fat is also added to the quark and sour cream before mixing it with the pasta. In some places, it is also baked for a bit with – or without – sour cream on the top.
It can be a main course or a side dish for paprikash.

The name is derived from the German name Liptau for the region of Liptov (Hungarian: Liptó) in northern Slovakia, a former county in the Austro-Hungarian Empire. The quark is mixed with chopped onions and sour cream, seasoned with paprika, salt, pepper and ground cumin. It is served as a sandwich filler.