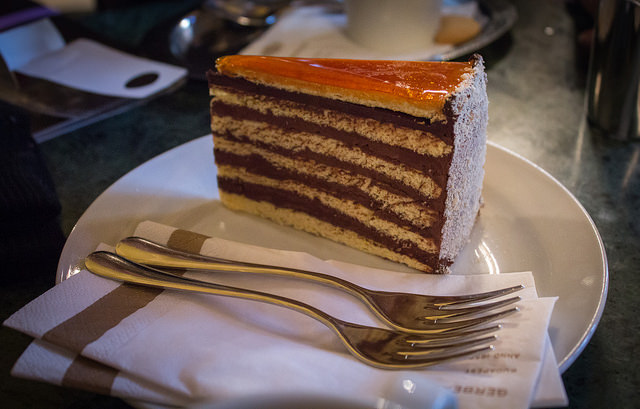 Dobos Torte is one of the tastiest well-known cakes in Hungary, and a best seller of desserts in the Budapest Market Halls. The cake was created by Jozsef C. Dobos confectioner who aimed to create a cake that would last longer than other pastries, as in the end of the 1800s the cooling techniques were limited. Dobos Torte was first introduced at the National General Exhibition of Budapest in 1885; King Franz Joseph I and Queen Elisabeth were among the first to taste it.
The cake soon became popular around Europe, it is taste, unique appearance, and it has durability through shipping.

The 6 sponge cake-like layers are softer than other sponge cakes, as melted butter has been added to the mixture before baking it.
Jozsef C. Dobos used fine buttercream for the fillings – as it was not common at that time, so it made the cake more special. The chocolate buttercream and the batter of the cake were both invented by him. Notably, the buttercream incorporated cocoa butter for extra smoothness. The top of the cake is covered with caramel to prevent it from drying out, and the sides of the cake are covered with grounded walnuts.
During his lifetime, the cake was often imitated but never reproduced. Near the end of his career, he donated the receipt to the Pastry and Honey-Makers’ Guild in 1906.

Fancy to try Hungarian meals and sweets in Budapest? Join us at one of the Tasting Tours.