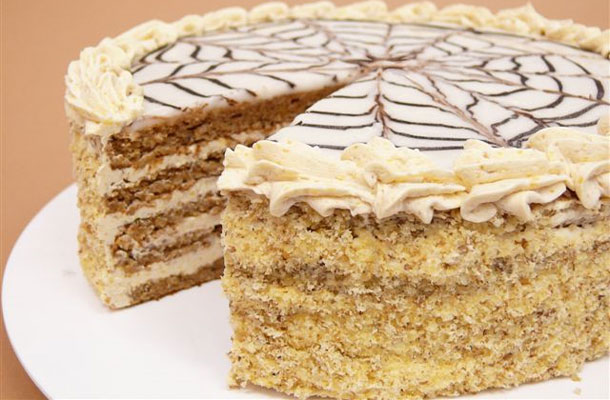 The Market Halls of Budapest often offer Esterhazy cake, which is a beloved cake and one of the best-known classical Hungarian cake in the Hungarian gastronomy.  The cake is named after Prince Paul III Anton Esterhazy de Galantha (1786–1866), a member of the Esterhazy dynasty and diplomat of the Austrian Empire. It was invented by Budapest confectioners in the late 19th century and soon became one of the most famous cakes in the lands of the Austro-Hungarian Monarchy.

Esterházy cake consists of buttercream spiced with cognac or vanilla, sandwiched between four and five layers of almond meringue (macaroon) dough.  The cake is iced with a fondant glaze and decorated with a characteristic chocolate striped pattern.
There are, however, many different recipe variations, but the cake always has to be made without flour. In Hungary, the original almonds have been entirely replaced by walnuts.

Why not try the best Hungarian Foods and sweet at one of our guided Tasting Tours?